When people talk about featural writing systems, almost all the time, the Hangeul writing system pops up. Its simple 40 letters (19 consonant and 21 vowel sounds) organised into syllable blocks form what is now the simplest writing system so far. Promulgated by Sejong the Great in the mid 15th-century, Hangeul has since been ingrained in the history of the Korean Peninsula. Little do people know, there is a writing system in Africa which works a little bit like Hangeul. Used in South Africa for Southern Bantu languages, this writing system is extremely recent, with resources only dating to 2015.

A couple years ago, South African linguists began research and development for a new indigenous writing system which would be officially recognised. Named “isiBheqe Sohlamvu” (Zulu), or “Ditema tsa Dinoko” (Sesotho), or simply “Ditema syllabary”, this writing system is made up of triangular shapes with additional scribbles inside them to form syllable blocks. Their motivation was powered by the problems brought to them by the Latin script which they currently use. The long, disjunctive words in the orthographies often created problems when reading or writing the Southern Bantu languages, spoken by people in South Africa, Mozambique, Zimbabwe and Botswana.

The Ditema syllabary was thus created to produce visual guides on how the syllables are pronounced, organised into neat syllable blocks which look like triangles. Vowels are oriented based on the position of the tongue in the mouth, and even clicks got their own neat symbols (isiXhosa and isiZulu had to use c, q and x for the click sounds in the Latin script). 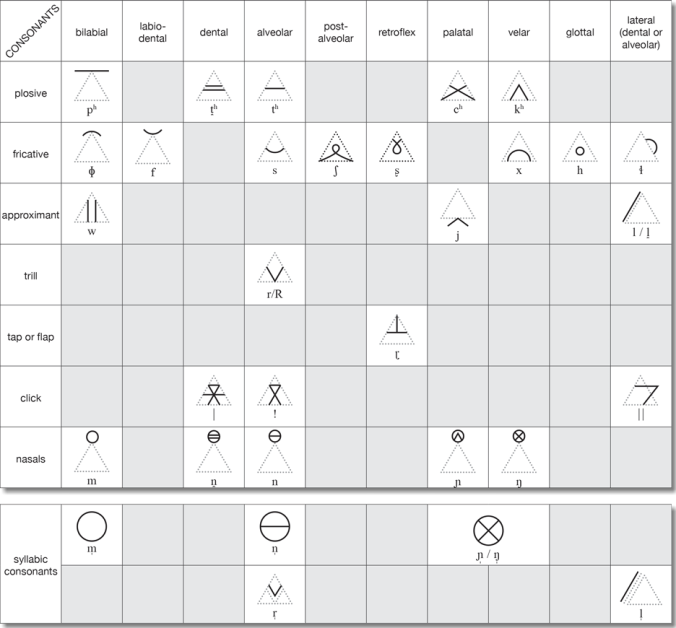 They also have additional diacritics for additional sounds, like implosive, ejective and breathy ones.

The chart below shows how vowels are read, which are quite comprehensive as the triangles point differently depending on whether it is a back or a front vowel.

And once you have your consonants and vowels, you’re ready to form syllables!

In my opinion, the Ditema syllabary is set to be a successful indigenous writing system of the African continent as it aims to be as readable as possible to the Southern Bantu speakers, and it also targets to foster the idea of multilingual literature with a Pan-Africanist system along the lines of other decolonial literacy movements in Sintu-speaking Africa, such as Mandombe in the Democratic Republic of Congo and Mwangwego in Malawi. The Zulu name for this writing system, isiBheqe Sohlamvu, literally translates to “syllabic love letters”. It is a great name for this revolutionary writing system with respect to what it aims to achieve. I believe that this project will create huge success, and given enough recognition, we’d see isiBheqe Sohlamvu make its way into social media.

One thought on “Writing in Africa – A Korean-like Script?”